Roy H. (Pop) Moore, Sr., was born in 1893. In the 1910s, he was a professional heavyweight wrestling champion (not the type of pro wrestling that is around today). Pop lived to age 87 and his wife Gracie lived to 93. Roy Jr., their natural son, is still alive and is 91 years old. I often take Roy Jr. to various judo events.

During the 1920s Pop became friend with Dr. Kano. Sometime during the mid to late 1920, Pop and his wife Gracie became the foster parent of Mel Bruno. Mel was about ten years or so older than Roy Jr. Pop taught judo and wrestling to both Mel and Roy Jr. In 1930-31, Dr. Kano, asked Pop Moore to be the 1932 Olympic Wrestling Coach for Japan. (Roy Jr. made shodan in Japan in 1937 when he was 16 years old!)

Two Japanese wrestlers/judokas stayed with Pop Moore to study wresting. They were closer in age to Mel Bruno, as Roy Jr. was ten years old in 1931. One of the two judokas was Kotani (later Judan) Sensei.

Mel Bruno was instrumental in starting judo in the Armed Forces. When you look at the pictures of AF Judo during the 1950s and 1960s, you will find many pictures of Kotani Sensei and Mel Bruno, together.

During WWII, Roy Jr. served as a welder in the US Navy, repairing ships in the South Pacific. Pop and Mel, were Chief Petty Officers in the Navy and taught judo and self-defense (Pop was close to 50 years of age at that time). Pop wrote, in 1944, a training manual on judo and Mel wrote a couple of pages on judo contest rules. I have the onion skin copy of that training manual. Pop gave it to me prior to his passing in 1980. 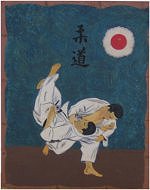 “Pop” Moore was always happy to see us Bergstrom Judo Club (Austin, TX) guys come in his dojo in Austin for a good workout. Even at 72 years he was like a walking brick; however, his snappy, smooth techniques showed no telltale strength tactics many strong Judoka often do. Fuzzy memory prevents me from remembering if Roy Moore, Jr. visited the Austin dojo, but Mel Bruno did several times -- accompanied by Kotani sensei at least twice during the mid-1960’s.

Kotani sensei came to our Bergstrom club and actually remembered Robby Robinson and me from years before when we lived in Japan. He was instrumental in organizing the U.S. Air Force, SAC-ARDC combative measured course at the Kodokan that both Robby and I attended. Yes, with the leadership of USAF General Curtis LeMay, Mel Bruno and Roy Moore Sr. were important figures in establishing Judo in the U.S. military and in essence increased interest in Judo throughout the entire USA.

Thanks for the memories......Jeff
noboru

Great video!
Probably not 1940's, but no time today to comment in detail.
Will get back, but great stuff.