About him from FEJ (Federation European Jodo) website: http://www.fej.ch/en/tea-pkrieger.htm

FEJ website wrote:In 1963 (October), he enters the Montreux Judo Club and starts training in Judo. In 1966, he moves to Geneva and enters the Shung Dô Kwan, one of the outstanding martial arts club of the city. He obtains his 1st degree black belt in Judo just before leaving, by boat, for Japan. He stays there during two years during which he meets Donn F. Draeger Sensei who introduces him to Shimizu Takaji Sensei, Headmaster of Shintô Musô Ryû, in March 1969, as well as to Kuroda Ichitarô Sensei at the same period. As from that time, Pascal Krieger trains in Judo at the Kôdôkan, in Jôdô at the Rembukan with Shimizu Sensei, and in Iaidô and Shodô (calligraphy) in Ôji with Kuroda Sensei. In order to survive, Pascal teaches French and English a few hours a day.

FEJ website wrote:Draeger Sensei requests him to go to Chicago, USA, to take the direction of the production of a Judô magazine Judo Illustrated in which he writes very appreciated Budô articles. It is a rather uncommon professional experience. Pascal follows all the national Judo championships, camera in one hand and pen in the other in order to write articles which he gets edited by a native speaker editor. Then he does the composition on an early IBM typewriter, lays out the material and even prints the magazine on a brand new ABDick. At the same time he practises Judô at the Uptown Dôjô. For Jô practice, he goes down the State of Illinois to Peoria to train with Relnick Sensei who is working in this city.

FEJ website wrote:In August 1976, Pascal Krieger establishes himself in Geneva again and joins the Shung Dô Kwan with which he had kept a close relationship. Soon afterwards, he starts teaching regularly Judô, Jôdô, Iaidô and Shodô.

FEJ website wrote: he is promoted Yodan in Judô by Mikami Sensei and Kondo Sensei.

I knew Pascal as a training partner and friend at the Kodokan in 75-76. I didn't know "the rest of the story" about his life and budo studies which is very impressive. Glad to see that he is still active at 70 years of age. I have great respect for Pascal.
noboru

Pascal Krieger, Jôdô la voie du batôn/ the way of the stick
Link to pdf book is here http://www.mediafire.com/?oh0ncxmmgzj and it is oficial from FEI pages http://www.fej.ch/en/news.htm
noboru

In the book Jôdô la voie du batôn/ the way of the stick from Pascal Krieger i a lot of interesting photos. 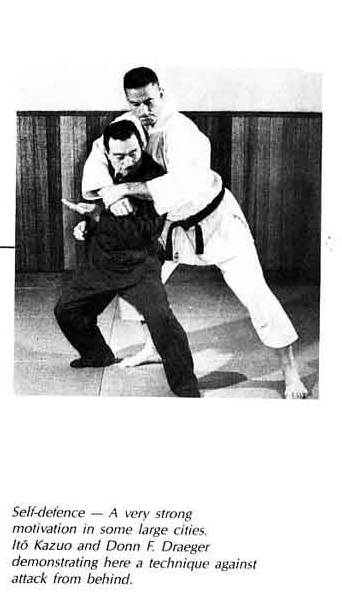 Krieger sensei is the "grand teacher" at our dojo. He's visited to teach jo and judo and according to the folks who took the training was quite strong in newaza.

We have two kakemono of his calligraphy hanging in the dojo. It's like living history.
noboru

I found next very nice Pascal Kriegers' calligraphy with judo theme - Jûyoku, Gô wo Sei suru - "be conscious of your suppleness and you will control your strength" or "the ability of being supple generates power"

Interesting - he uses this motto in his jodo teaching too - from their event Kagami Biraki 2012 - http://www.fej.ch/en/records2/KB12.htm
noboru

I have received information that there is a website where it is possible to order calligraphy created by Pascal Krieger. The website is said to have been created by his students. There is a form for choice of size, style and calligraphy theme, as well as payment information for the service.