Hello, I get book Fighting judo from Katsuhiko Kashiwazaki ( was 1981 World Champion. An outstanding technician and kata expert. He won international events such as Jigoro kano Cup, Budapest Cup, Havanna and Kodokan Cup. He was multiple champion of Japan U65kg. was longtime Judo teacher on IBU (International budo university) )

There are some his quotes- judo related. I try to put them here. They are very interesting.

Very interesting is interview with him. Here is source http://www.judolink.club/interview-kashiwazaki.html


Katsuhiko Kashiwazaki is the 1981 World Champion of judo at -65kg from Japan. He is well known in the judo circle for his mastery of newaza (ground work) and sutemi waza (sacrifice throwing techniques), in particular, yoko tomoe-nage. At present, he is the head of the International Department and Judo Department at International Budo University in Japan. In December 2014, few days before Christma, he came to Italy to teach a seminar of his favorite techniques. I had a chance to catch up with him and ask few questions.


What do you think about the current judo competition rule that prohibits any leg-grabs?

A: I don't like it. I cannot use 40% of my techniques such as kuchiki daoshi, leg-grabbing o-uchi-gari.


How does this affect judo in open weight?

To block the lower hip and legs is important for a small man to fight a bigger man. It is bad because now you practically cannot fight open weight because you cannot block the legs or hip when the bigger and taller opponent attacks from a dominant grip.

In Japan what rules do they use in domestic competitions?


In Japan there are two main rule sets: Now they use the new IJF rules in most competition. Unfortunately there is not enough influence from the Kodokan. It's a political problem. The All Japan Judo Federation does not work together for a common goal with the Kodokan. The IJF has too much influence in the direction of international judo and the A. J. J. F. and Kodokan are always behind.


The dominant nature of the IJF is not a good thing for the development of traditional judo. The All Japan Judo Federation must work harder to restore the traditional judo techniques in sport judo.


How difficult did you find it to train and maintain technical proficiency, conditioning and strength when you trained alone from 22 to 30. Did you find it difficult when entering competition again?


I was a particular case in Japan because I was working as a high school physical education teacher during that time at a remote place in northern Japan. At the beginning I would try some techniques with my students but later I realized that what often worked on them did not work when I went to train with stronger judo players at the universities. This is because my students were too weak, so I decided not to do randori with them anymore and train mostly shadow uchi-komi by myself. It was better this way.

Generally, two weeks before a competition, I would go to train with the university judo teams and do randori. It was enough to prepare for competitions. I am a rare case to have trained and competed like this, as far as I know I was the only one in Japan who trained like this for high level competitions.


At what point did you decide to change your judo completely and abandon morote seio-nage?


After I broke my elbow three times I had to change my technique. That was before I entered university.


Are there some top competitors in Japan today that you think are newaza specialists and have very effective competition newaza?


There are some women on the national team who are consistently very good at newaza and they can effectively apply it consistently in high level international tournaments. In the men's team, currently there are not many players who fit this description. They have good newaza, but it's not their main technique of winning.

his speech from Fighting judo 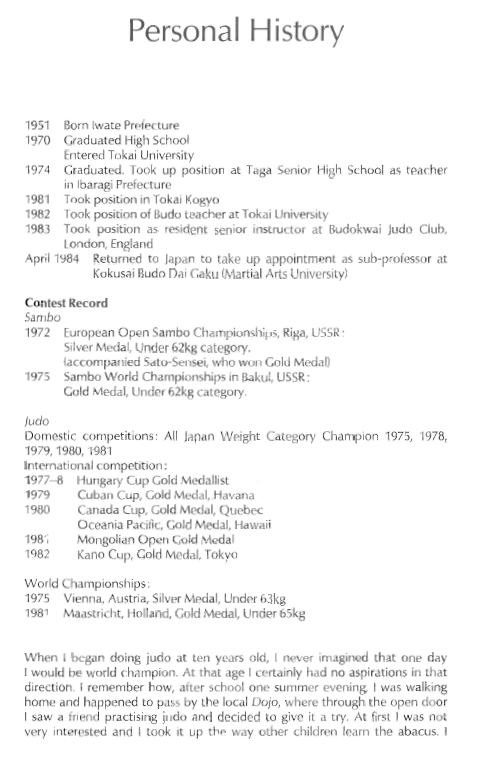 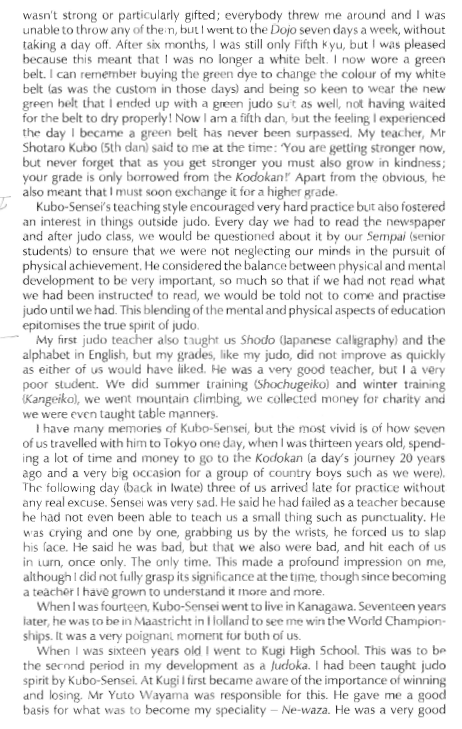 his speech from Fighting judo 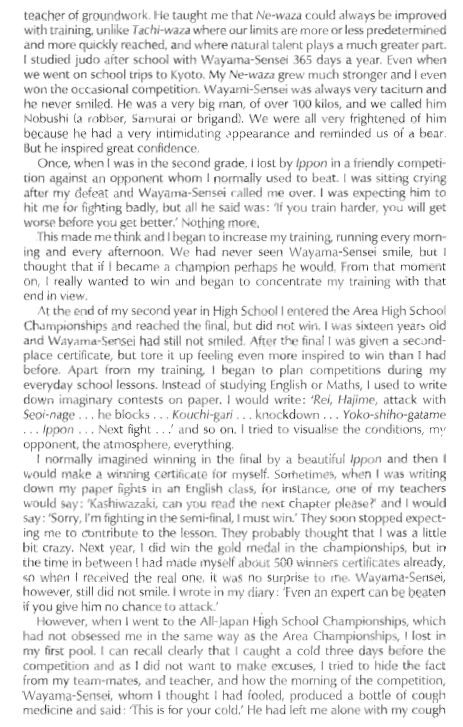 his speech from Fighting judo end 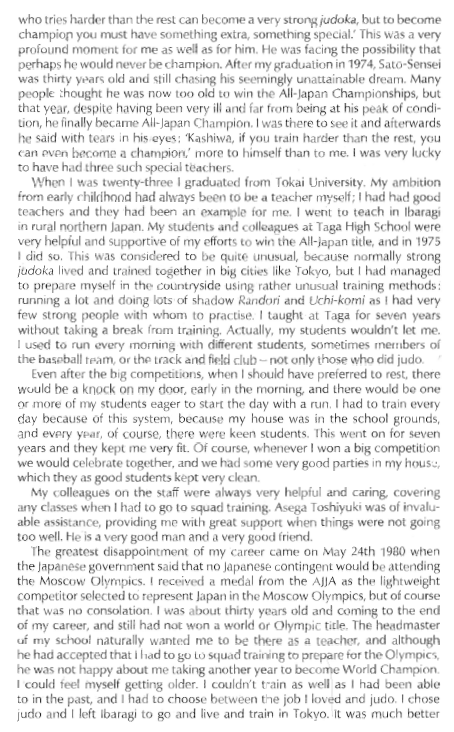 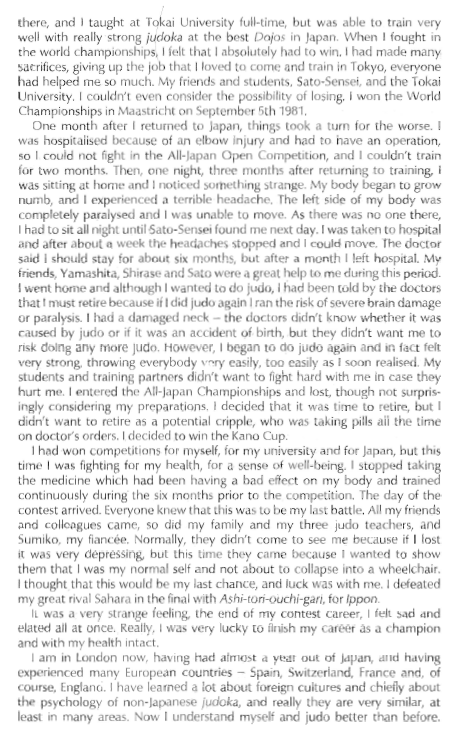 Re: Katsuhiko Kashiwazaki's quotes from his book Fighting judo

Re: Katsuhiko Kashiwazaki's quotes from his book Fighting judo