You are not connected. Please login or register
+3
BillC
DougNZ
genetic judoka
7 posters

I missed you guys 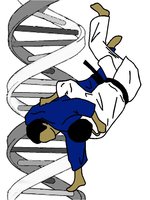 I missed you guys

Hi all, I've taken a long vacation from this forum, and from judo. I messed up my back pretty bad (3 herniated disks), and haven't been on the mat since late june. if that wasn't bad enough, I then had to move a whole apartment worth of furniture with very little help. I took a break from the judo forum because it was just too much of a tease to me, knowing I was looking at a long time off the mat. well, my back has healed up a lot, but still hurts from time to time. I think I'm gonna try to get back on the mat soon, hopefully before the end of the month.

anyways, I don't wanna ramble on. I just wanted to check in to let everyone know I'm alive. I'll be back on here when it no longer drives me crazy.
_________________
Warning: I am very opinionated, and very willing to share that opinion. However I am very much aware that I am here as a student, not a teacher.
DougNZ

Nice to have you back; I missed your posts. Glad to read your back is coming right.

Was it a judo injury? If so, doing what?
BillC

What? You were gone? Who are you?
_________________
Oh, East is East and West is West, and never the twain shall meet,
Till Earth and Sky stand presently at God's great Judgment Seat;
But there is neither East nor West, Border, nor Breed, nor Birth,
When two strong men stand face to face, though they come from the ends of the earth!

take it easy getting back into it. (yes, I mean both judo and the forum). Glad you're back, herniated and all.
Yabanjames

I should probably take this opportunity to say hello to all and sundry as well. So, "Hello"!

I was never a major contributor on the old forum, but did get involved in a spirited bit of back-and-forth from time to time. Have been lurking around this one for quite a while -- basically trying to decide whehter it was worth investing the emotional angst and time required to re-Forumize. But, of course, the answer is -- but of course! All you fine folks make it better to be here than not.

So, once more into the breach, dear friends! Mainly, I suspect, to offer cynical observations from the Kodokan about how Japanese judo isn't nearly as "Japanese judo" as everyone in judo thinks it is. Though will try to be more positive as the situation(s) warrant. Hajime.

See you there in 3 to 4 weeks.
_________________
Oh, East is East and West is West, and never the twain shall meet,
Till Earth and Sky stand presently at God's great Judgment Seat;
But there is neither East nor West, Border, nor Breed, nor Birth,
When two strong men stand face to face, though they come from the ends of the earth!

Hope the back continues to improve, GJ.

Good to have you both back.

GJ, you take it easy with your back.
Yabanjames

Hope the back continues to improve, GJ.

Alas, no Steeltown for too many years now...  Am hoping for at least a visit next summer -- though that seems many hard ukemi hence...

to answer the question, yes, I'm pretty sure it was a judo injury. I'm not sure exactly what caused it though, as my back was hurting for a while. it started in january, but I ignored it and kept training, then it started hurting elsewhere on my back as well. i ignored it again, and kept going, figuring it was a pulled muscle. it wasn't until june that I realized it was getting worse, not better. a fellow that I know, who knows a thing or two about back problems took a look and saw some lumps on my spine. said I had 3 herniated discs. I stopped at the end of june, after a randori session where a a good friend/training partner tried and failed to spin out of a fully engaged throw, and broke his collar bone. yes, it was someone else getting injured that made me take a break. I'm not sure how that worked out.

also, an update. I got back on the mat on monday for the first time. though I did BJJ, not judo. I figure if I had to try my luck, I'd do groundwork first, figuring if groundwork made my back hurt, taking falls is a terrible idea, so that was sorta my way of easing into it. I woke up the next day with my back being ironically the least sore part of my body. I visited the judo club (to watch) at my new university, and to my dismay it was mostly brand new beginners, and a pretty hard mat. I may or may not be ready to get back into doing standup judo, but I don't think I'm yet ready to take falls from brand new people on a hard mat. so I'm gonna give it a lil while before I start practicing there. I'm also looking at the other local clubs, but that's more of a question of what I can afford.
_________________
Warning: I am very opinionated, and very willing to share that opinion. However I am very much aware that I am here as a student, not a teacher.
Sponsored content

» Letting off some steam
» Hey guys
» Whats up guys
» Debut fight for one of my guys
» Need help finding a nagekomi video- one that you guys'll definitely know!
Current date/time is Sat Aug 20, 2022 4:57 am