Yamada Kenji, head-sensei of the oldest surviving Jūdō dōjō outside of Japan (the Seattle Jūdō Dōjō) passed away this Wednesday, April 24, 2014 in Seattle. Although born in the US (in Utah) on March 11, 1924, he learnt judo in Japan, and this in Fukushima, in 1937. Yamada Kenji was one of the great Japanese-American champions remembered by many of the old guard. He was a light weight with a devastating uchi-mata with which he was able to throw much heavier opponents for ippon.

The Pacific Northwest had a concentrations of superb jūdōka until the 1950s when some of the started moving elsewhere, such as the Osako brothers who ended up in the Chicago area.

Yamada Kenji was a 1954 and 1955 US Champion. I think he weight less than lbs. 150. I think he also was a runner up in the Open. Robert W. Smith wrote the following about the 1954 championships:

"In the finals LeBell won a decision over the 50 lb. lighter Yamada of Seattle. In the thirteen minutes of the bout Yamada attempted 11 throws, LeBell 7, including kaeshi attempts. Yet Yamada lost, probably because his posture was not upright, and he skirted the edges of the tatami overly much. We respect the decision, of course, but it is my feeling we indirectly insulted Kotani Sensei by not allowing him full jurisdiction over the decision. The rules provide that the referee may be the sole judge.

Also, perhaps we should amend the rules so that where there is no conclusive point scored in the overall finals we may have co-champions. The Kodokan did that in 1949 when Ishikawa and Kimura locked horns. I agree that a winner must be declared in the eliminations but I submit that it may be manifestly unfair to a man who manifestly battles his way into the finals to lose by judges' decision. This final bout ought to be conclusive and the LeBell-Yamada go certainly was not.

Another criticism. At one juncture a sandan refereed a match between two yodans. This is almost ludicrous. If the sandan doesn't have the propriety to bow off temporarily, other authorities should intervene to remedy the situation. This custom should extend to the judge." (...)

Yamada-sensei was one of those sensei where you always felt he was and remained Japanese, and I write these words with care as to not insult anyone's citizenship or patriotism. What I mean is that his judo views remained untarnished by Westernized popularization. Yamada-sensei was an especially valued number during the team competitions in which he was an almost certain victory against his adversary. He was in the team with other greats who have passed such as Seattle's George Wilson. The Seattle Jūdō Dōjō was in itself a kind of permanent museum with numerous pictures against its wall from a time long passed. There are original pictures there signed by Nagaoka Hideichi and Kudō Kazuzō. It was visited several times by Kanō himself. The dōjō where Yamada-sensei had been teaching since 1946 is often nicknamed "the Church" because of its characteristic shape.

Yamada-sensei became a member of the Kōdōkan in April 1938, and was promoted to Kōdōkan 7th dan in 1993. The late Onchi 'Jim' Sadaaki,a that time himself a Kōdōkan 8th dan, told me in 2003 or 2004 it had required him considerable effort to get Yamada-sensei's promotion to 8th dan approved as Yamada-sensei wasn't very interested in further promotions or all the paperwork that goes with it. After the premature death of his wife Haruko in 1991, he became more withdrawn and found a new interest in gardening.

The Seattle Jūdō Dōjō was a dōjō I liked visiting because of its historic atmosphere. No blue gi and rash guards there, and a steel-spring permanent tatami, a luxury these days. It is no longer the original jūdō dōjō where jūdō had started in the United States, but 1946 is old enough for me, and some of the pictures are much older than that. For those interested, I refer to our friend Joseph Svinth's magnificent book "Getting a grip" in which he deals in his characteristic well-documented way with the history of jūdō in the Pacific way.

Yamada-sensei had stopped teaching many years ago, but when I occasionally visited, sometimes he suddenly popped up out of the blue like he had some sixth sense or someone had lighted the Bat-signal. Last time I met him, I think was in 2003 or 2004. I don't think he ever knew my name, and he would address me "Ha, kyōshi, ha, ha, kyōshi". He would then change, put on his Kōhaku obi and gi and step on the tatami. I could hear the club's members then whisper, "wow, Yamada-sensei came on the tatami today" which must have been quite special and something younger members present had not experienced before. He was about 80 years old around then but still relatively mobile, and apparently also still ... in charge because when I inquired where so and so was who previously had been very present, I was told he had personally kicked so and so out ...  That is also what I meant when I said ... "he was very Japanese" in a certain way ...

He was Japanese also because he was someone you could communicate with without saying much. I'd like to write that ... "I had conversations with him" over the years, but I don't know if this is true. I mean ... I have the feeling we had conversations, but at the same time I am not sure if I would write them "all" down that they would cover more than half a page. He communicated more with shaking his head in various directions, and by uttering sounds than in full sentences, and yet he could clearly convey his wish or meaning.

I would imagine that Dustymars may know Yamada-sensei from his old days, and I know there are other Judoforum members here who knew him. When I looked on Google for a recent picture of him is found one from 2012 of him in a wheel chair covered by a blanket and looking old and fragile. I am not going to put a link to it as I think the picture is inappropriate. I think that man deserves to preserve his dignity and I doubt he would have approved of such a private picture being there for everyone to see on the Internet. However, I did find it more appropriate to post one from his glory days below taken in his dōjō. 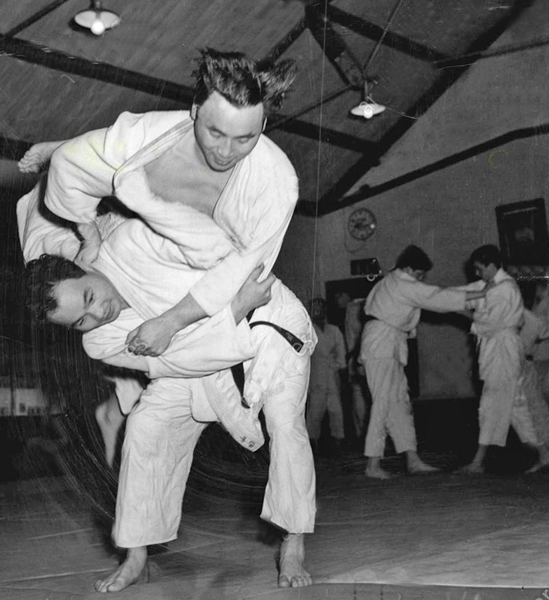 With Yamada Kenji the sad parade of remarkable sensei leaving us in recent years continues, sensei who were born in the early 1920s who printed that stamp on an era of judo gone, a judo that in competitions would still position light weights facing heavy weights, a judo of hard practice untainted by the current travesty of IJF judo, moves on.

Yamada-sensei fathered 9 children, and on behalf of the JudoForum I offer my condolences to his children and loved ones.
_________________

"The world is a republic of mediocrities, and always was." (Thomas Carlyle)
"Nothing is as approved as mediocrity, the majority has established it and it fixes it fangs on whatever gets beyond it either way." (Blaise Pascal)
"Quand on essaie, c'est difficile. Quand on n'essaie pas, c'est impossible" (Guess Who ?)
"I am never wrong. Once I thought I was, and that was a mistake."