Im interesting about judo history the little bit - exactly czech/czechoslovak judo history. Some czech sources refer to Kanos visited in Prague (Czechoslovakia / Czech Republic) in years 1920, (1933 or 1934 ) and 1936. I found lot of detailed informations about his visit in Prague on 1936 (way to Olympic games in Berlin, lead judo session (new school year) and gave the speech, photo from train station), but no about years 1933 or 1934.

Please have you got any informations about Kanos visit Prague in years 1933 or 1934? Or do you know some sources about these trips (english, japanese)?

Jigoro Kano was both years in Europe and visited more european countries, demonstrated and taught judo.

Upon returning to Japan, Kano took care of some problems involving his third son Riho, who had been arrested for consorting with Communists. When this problem was taken care of, Kano prepared for a trip to Vienna, where he was to attend another International Olympic Committee meeting. The latter trip cost ¥16,500, an expense borne by the Tokyo municipal government.

Kano left for Vienna on May 17, 1933. Accompanying him were two judo 6-dans, Sumiyuki Kotani and Masami Takasaki. Takasaki was Kano's son-in-law, and the winner of the All-Japan Championships of 1930. Meanwhile, Kotani, a future judo 10-dan, had represented Japan in freestyle wrestling during the 1932 Olympics. During this trip, Kano demonstrated judo in Germany and Austria, and attended the International Olympic Committee conference in Vienna, an international parliamentary conference in Madrid, and meetings at the German Sports Ministry in Berlin. While passing through Italy the motor coach on which Kano was riding went off the road, leaving a portion of its length hanging over a precipice. Subsequent reports said that while some of the other passengers became hysterical with fear, Kano sat unperturbed until everyone else had gotten out to safety. [EN15]
source EN15: EN15. Xerographic copy of research notes prepared for Saburo Matsushita by Trevor Leggett, courtesy of Richard Bowen.

Jigoro Kano demonstrating his Kodokan Judo in Vienna in 1933


Source: http://www.kanosociety.org/Bulletins/pdf%20bulletins/bulletin4.pdf
This was originally a course of four
lectures delivered by Jigoro Kano at
the Drill Hall of the 13th Battalion
London Regt. - The first lecture took
place on August 28 1933

Source: http://100yearlegacy.org/english/Kano_Jigoro/Chronology/
1933 73 June - travelled to Vienna to attend the IOC Session. Yôtaro Sugimura was appointed to the IOC membership in this session Attended Deutsches Turnfest (German Gymnastics Festival) held in Stuttgart
Commended by French government for his service to physical education
Met Adolf Hilter in Berlin
Instructed at the Judo training session organised by Bavarian Government. Made lecture and demonstration of Judo in Vienna, London and France
Lectured at Singapore Judo coompetition (returned to Japan in November)

1934 74 Kodokan building newly constructed in Suidobashi
April - attended the IOC Session in Athens, Michimasa Soëjima became IOC member in this session
Made lecture and demonstration of Judo at the Parnassus Literary Society in Athens and in Vienna and London. Met Carl Diem and others (returned to Japan in September)

I looked quickly but didn't spot anything in Japanese on the trip.
NBK

Today I found reference to a film made in 1933 in which Kano shihan demonstrates judo. If I understood the reference correctly, the film is in French. Perhaps during the trip in question.
noboru

Thank you a lot for your endeavour.
Reinberger

NBK wrote:Today I found reference to a film made in 1933 in which Kano shihan demonstrates judo.  If I understood the reference correctly, the film is in French.  Perhaps during the trip in question.

I know for sure, that a newsreel-report was taken about Kanō-shihan's visit to the (so-called) 1. Oesterreichischer Jiu-Jitsu-Klub in Vienna on June 12, 1933. While most of the demonstrations there seem to have been made by Kotani and Takasaki, there are photos from that event, that show Kanō Jigorō himself, albeit in western clothing, demonstrating techniques (look here: https://judo.forumotion.com/t1291p15-meeting-between-hitler-and-kano#12467).

I already tried to unearth that movie, but unfortunately the relevant reel is one of the lost ones in the respective archive. However, as the people there talked about "if it re-emerges ...", perhaps there is a glimmer of hope, that we will be able to see that movie one day in the future. Of course, the report itself must have been in German language.
_________________
Kind regards, Robert
noboru

Here is more info about Masami Takasaki. He accompanied Jigoro Kano with Sumiyuki Kotani in year 1933 in his trip around Europe.

Masami Takasaki – Tomiki’s
judo friend, was a captain
of Waseda University judo
club, the champion of the
all-Japan judo championship
sponsored by the group
supporting Meiji shrine
activities in 1925, and also
the husband of Kano’s
daughter.

Source: Judo’s techniques performed from a distance: The
origin of Jigoro Kano’s concept and its actualization
by Kenji Tomiki
from Fumiaki Shishida, Waseda University, Tokyo, Japan

He and Kano's daughter apparently divorced later. I've heard that Kano shihan thought that eventually Takasaki would replace him as Kodokan head, too.
noboru 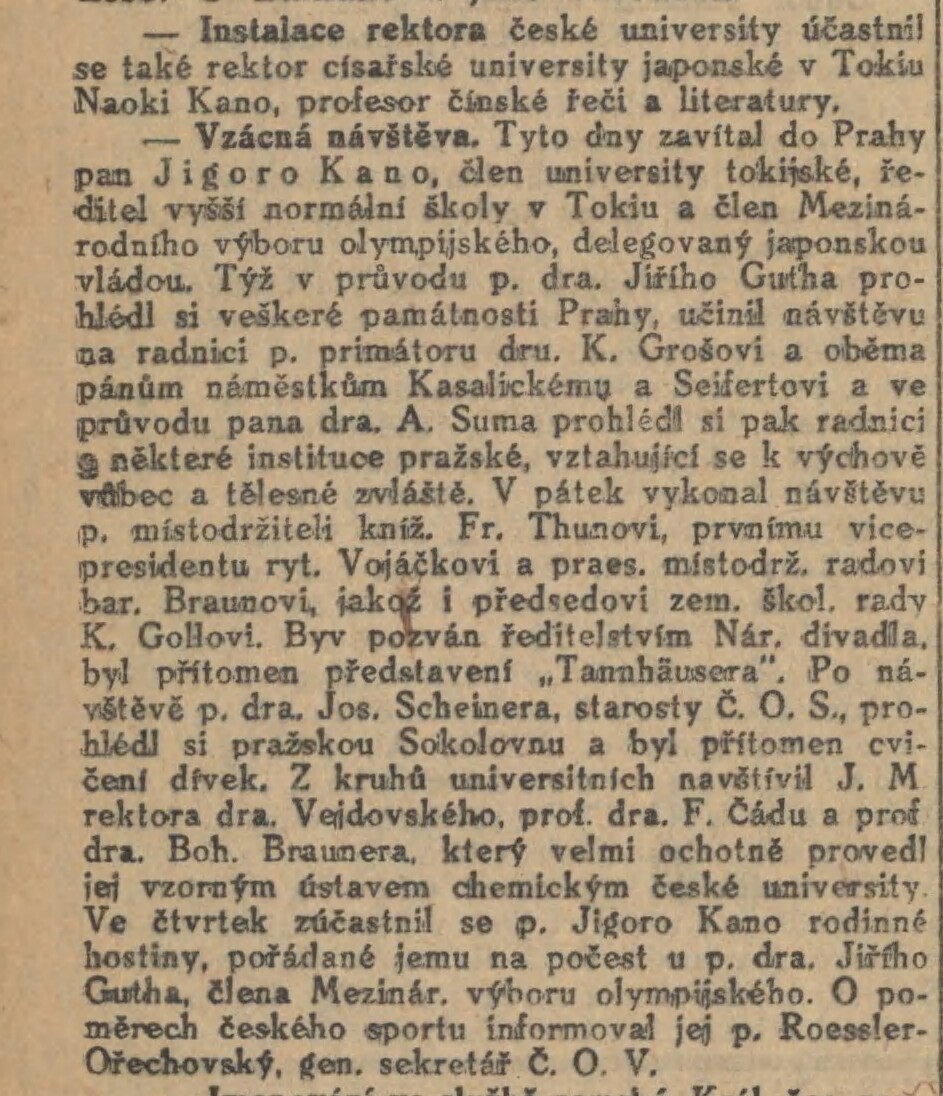 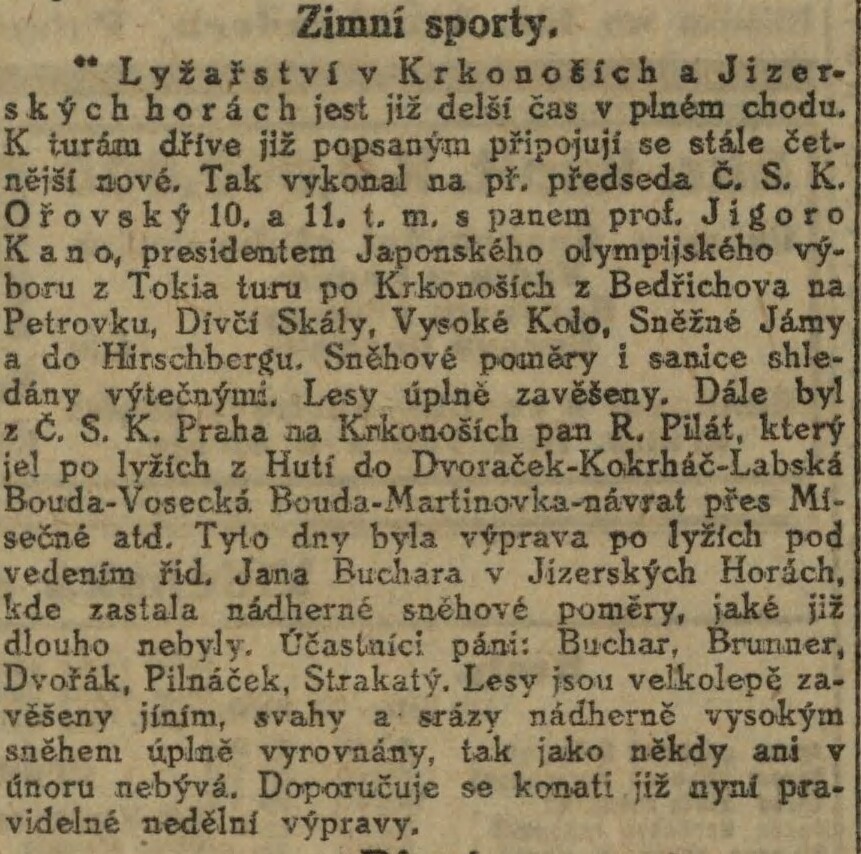 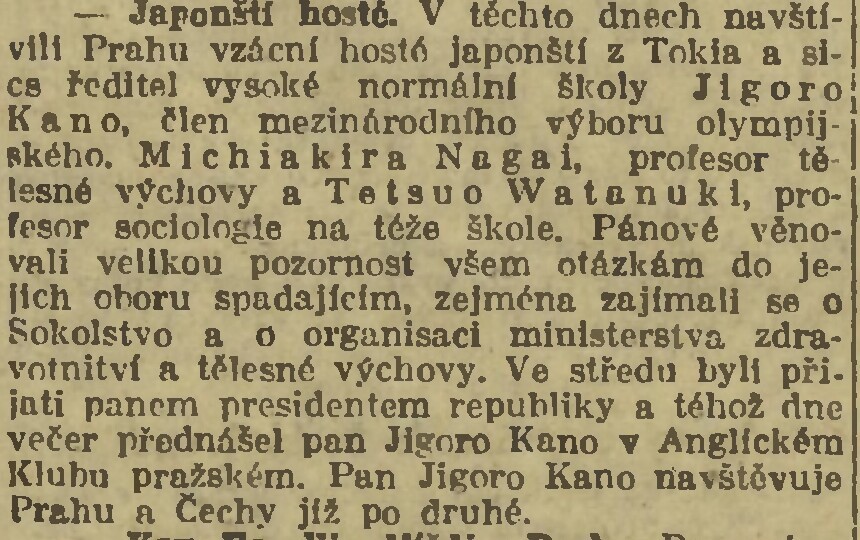 September 1936 - visited Prague on the way from Olympic games in Berlin. He did speech about judo in english language (spees is very similar with Kanos public speech from Olympic Games 1932 in Los Angeles), did some judo practice 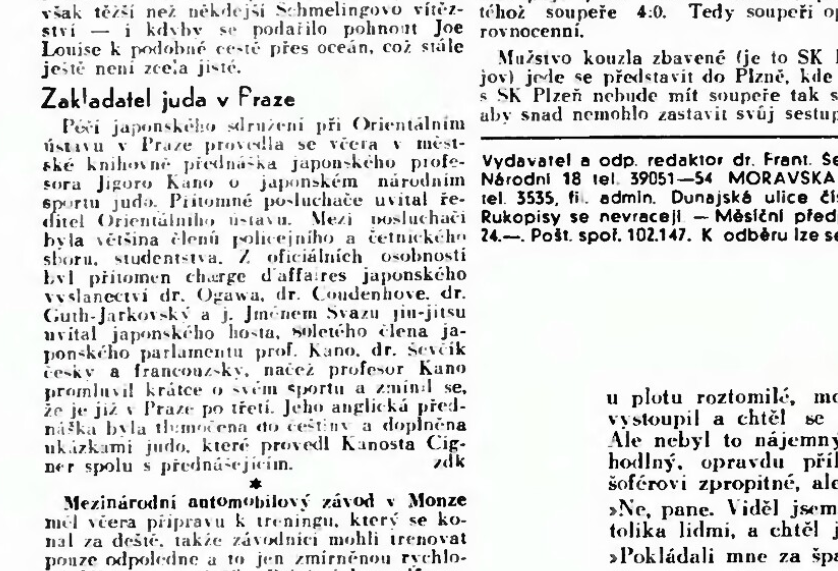 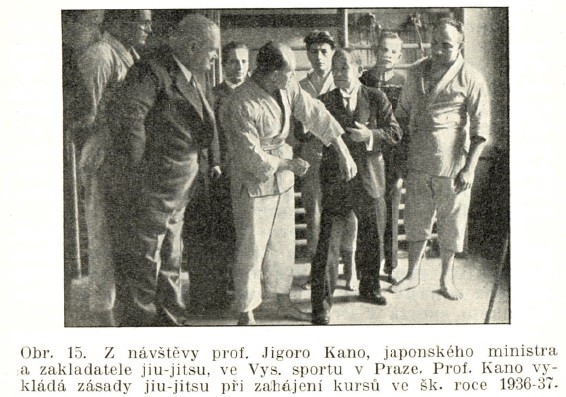 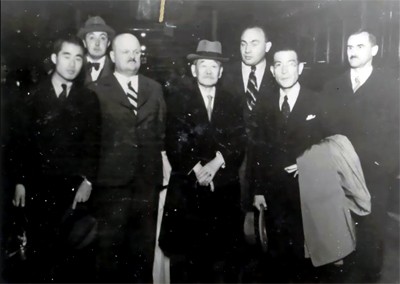