An annual event, Kodokan Autumn Kohaku-jiai (Contest between Red & White) was held on a grand scale at the Kodokan on Sunday, October 13, 2014.
We received 584 applications, and contests were held for respective divisions: Men's, Women's and Boys & Girls. Matches were held one by one in each contest, and winners fought succeeding matches until they lost or "Hikiwake" (draw).
There is a unique system called "Batsugun-shodan (instant promotion by preeminence)" in Kodokan Kohaku-jiai. Using the system, participants who won a predefined number of matches by Ippon are able to get a higher Dan grade on the same day. To qualify a competitor must score a certain number of Ippon throughout several matches, with the specific number of these points determined by the ranks of his/her opponents.

Thats quick to promote to yondan at 20...

Interestingly, that some good fighters in category -90 kg are quite short like

This is really nice! Thanks for letting me read this in english :3
noboru

Is that an unbleached KuSakura judogi in the top left of P-10? It's not visible on the online shop. Can someone who reads Japanese read the text there? 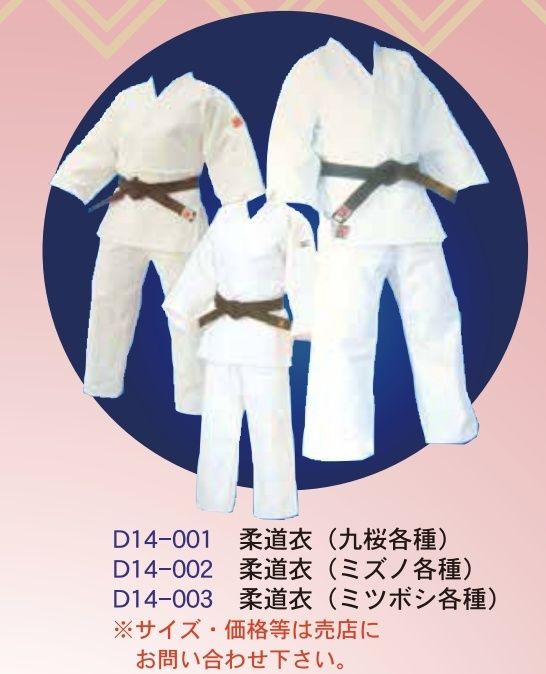 I know that they make their lowest beginners model with an unbleached option, but if there's some way to order one of the sturdy pro models in unbleached that would be excellent.
NBK

The pic you posted just shows a Kusakura gi, doesn't specify if unbleached.

Taijutsuka wrote:Is that an unbleached KuSakura judogi in the top left of P-10? It's not visible on the online shop. Can someone who reads Japanese read the text there?

I know that they make their lowest beginners model with an unbleached option, but if there's some way to order one of the sturdy pro models in unbleached that would be excellent.

The one on the left looked less starkly white than the others so I was not sure. From what I could make out of the text in Japanese there was no mention of anything to do with bleaching, indeed. Just judôgi KuSakura and weights.

The prints look very nice, though they were not yet in the international shop last I looked.
noboru

The Kodokan International Judo Seminar 2015 and the Judo Seminar for JICA Volunteers started on Monday, March 2nd. The total number of participants was nine: two coaches who were dispatched from Tunisian Judo Federation, and seven candidates for JICA volunteers who will teach Judo abroad. They will study various things related to Judo - its history, basic technique, application technique, Kata, various coaching methods and so on - from morning to night, until March 25th.

JICA is the Japan International Cooperative Agency - they've been sending judo instructors abroad for extended tours for decades. While they aren't a lot of them, collectively they've done an incredible job of spreading judo around the world. I've met some of the guys, they have some great stories of the places they go, people they meet, etc. I'm sure they've changed a lot of lives. Some are retired guys who are on a lark for a couple of years, others are younger pro judo instructors broadening their experience. Great program, greatly effective at soft power diplomacy for a pittance, as they sure don't make much money.
noboru 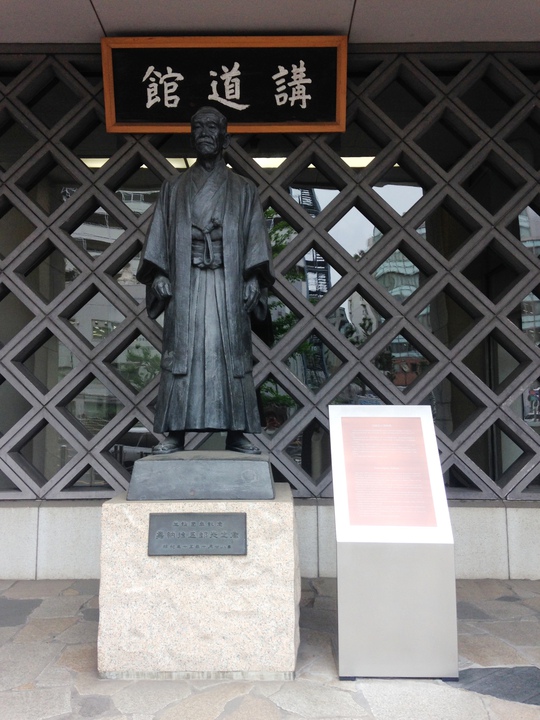 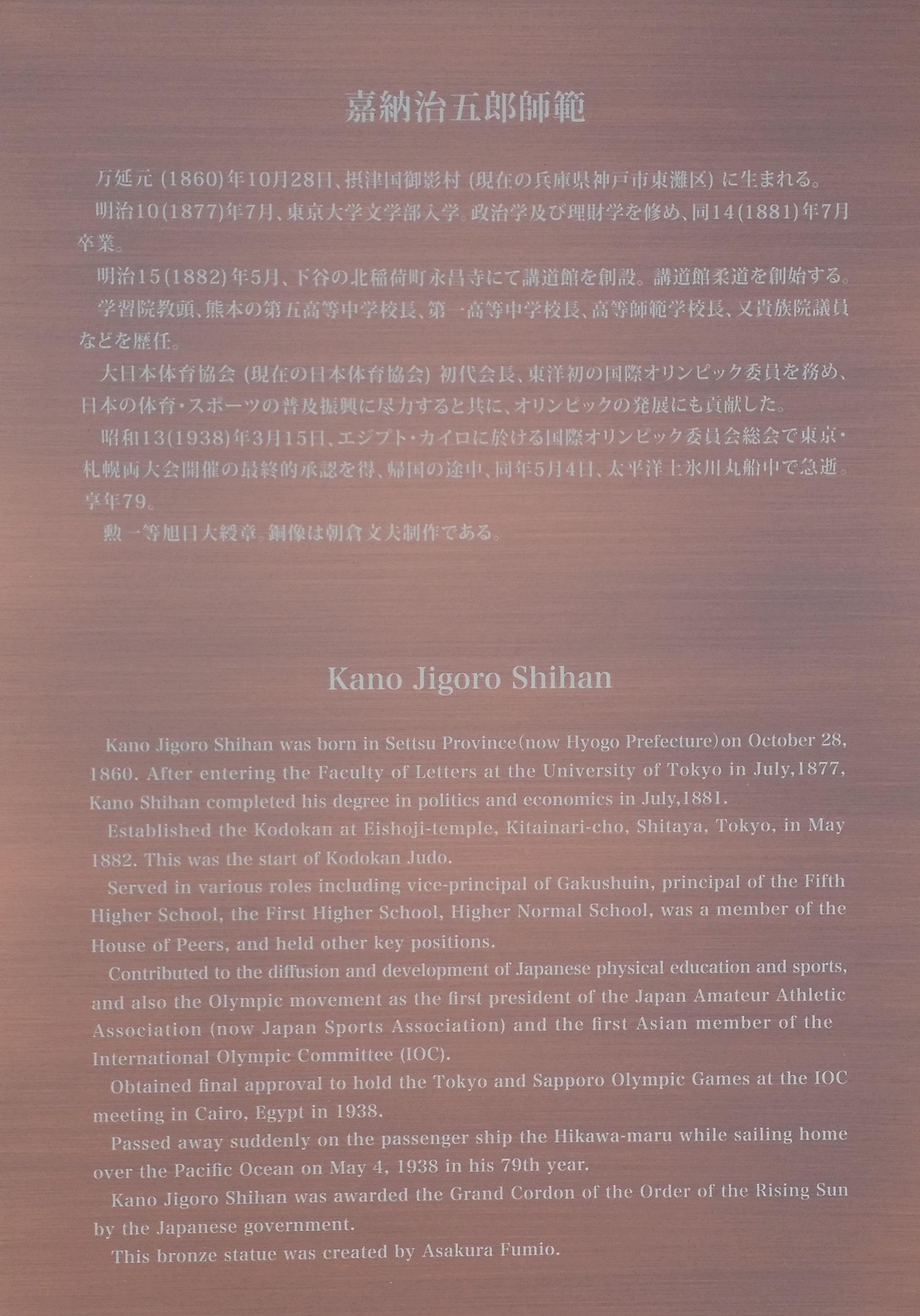 Kodokan Institute website wrote:
Kano Jigoro Shihan
Kano Jigoro Shihan was born in Settsu Province (now Hyogo Prefecture) on October 28, 1860. After entering the Faculty of Letters at the University of Tokyo in July, 1877, Kano Shihan completed his degree in politics and economics in July, 1881.
Established the Kodokan at Eishoji- temple, Kitainari-cho, Shitaya, Tokyo, in May 1882. This was the start of Kodokan Judo.
Served in various roles including vice-principal of Gakushuin, principal of the Fifth Higher School, the First Higher School, Higher Normal School, was a member of the House of Peers, and held other key positions.
Contributed to the diffusion and development of Japanese physical education and sports, and also the Olympic movement as the first president of the Japan Amateur Athletic Association (now Japan Sports Association) and the first Asian member of the International Olympic Committee (IOC).
Obtained final approval to hold the Tokyo and Sapporo Olympic Games at the IOC meeting in Cairo, Egypt in 1938.
Passed away suddenly on the passenger ship the Hikawa-maru while sailing home over the Pacific Ocean on May 4, 1938 in his 79th year.
Kano Jigoro Shihan was awarded the Grand Cordon of the Order of the Rising Sun by the Japanese government.
This bronze statue was created by Asakura Fumio.

The purpose of this series of international seminars is to educate young coaches who will lead their countries' Judo, on the theories and techniques of orthodox Kodokan Judo. Conducting these seminars, we are bringing up highly-skilled coaches who are well enough educated and have established the basis of Judo coaching. This will enhance the coaching resources of orthodox Kodokan Judo and will help to diffuse Kodokan Judo over the world in the proper way.

Together with the seminar, we provide a training course of Judo techniques for JICA volunteers. It aims to improve their Judo techniques and knowledge, to be able to respond to the needs of the country where they will be sent.

This time, the participants and the curriculum were as follows:
Participants

Two participants of the International Seminar:

The following is three members of the first team of JICA volunteers in 2015:

Mr. Yuki SEKIGUCHI (Graduated from Ryotokuji University. To be dispatched to Gabon)
He will belong to the Gabon Judo Federation and operate in the capital, Libreville. He will teach Judo to children and youths at dojos in the city as well as traveling local cities for Judo training and will survey the current situation of Judo in the country.

Mr. Daiki KOBAYASHI (Graduated from Doshisha University. To be dispatched to Chile)
He will belong to the Chile Judo Federation and operate in a north city Iquique, and work mainly at the Athletes' Training Center. He will coach athletes in various age and level, in the North area. He will travel to the member clubs for training and will advise on how to make teaching plans.

Mr. Genta ITEYA (Graduated from Toin University of Yokohama. To be dispatched to Panama)
He will belong to the Panama Judo Federation and operate in the capital, Panama. He will teach Judo to athletes between the age of 12 and 16, mainly at dojos in Panama and Veraguas and will propose the training plans that focus on basics.

The following is four members of the second team of JICA volunteers in 2015:

Mr. Fubuki EGUCHI (Graduated from Chuo University. To be dispatched to Samoa)
He will belong to the Samoa Judo Federation and operate in the capital, Apia, in Upolu Island. He will teach Judo to children, youths and selected athletes and also will conduct Judo classes in elementary schools. Furthermore, he will develop Judo coaches as well as revising the system of promotion for Dan and Kyu.

Mr. Yasuharu MIZUNO (Graduated from the National Defense Academy. To be dispatched to Madagascar)
He will belong to the Madagascar Judo Federation and operate in the capital, Antananarivo. He will lead instructors and teach the basics and spirit of Judo to youths and beginners, cooperating with the federation. The purpose is the re-formation of consciousness and teaching methods.

Mr. Kan MURAYAMA (Graduated from Waseda University. To be dispatched to Laos)
He will belong to the Laos Judo Federation and operate in the capital, Vientiane. He will strengthen the National Team and black belts and also conduct seminars for children and youths to increase Judo population. He will also cooperate with JICA volunteers who are operating in a south city, Savannakhet, to diffuse and develop Judo in local areas.

Mr. Shinpei MATSUMOTO (Graduated from Kansai University. To be dispatched to Paraguay)
He will belong to the Paraguay Judo Federation and operate in the capital, Asuncion. He will teach Judo to children and beginners in Judo classes that have been held in educational institutes since 2012, approved by the Sport Ministry. He will also strengthen the National Team and will provide instructors with teaching methods. Judo promoting activities are also expected.

This time, the International Seminar was held for nine participants. Two of them were Tunisian coaches who teach Judo mainly to juniors, and seven of them were candidates who passed two examinations for JICA volunteers.

The following is the website of JICA volunteers:
You are able to see the guidelines for applicants and the flow from application to acceptance.

I translated 30 of Kanô shihan's sayings into English for the panels to be displayed in the 'Exhibition of Panels and Banners'. A very rushed job but interesting - I'm going to ask permission to post someplace, there are some that most Westerners have never heard. All sourced with references.
Ryvai

Ditto Ditto and thank you
noboru

'Exhibition of Panels and Banners' 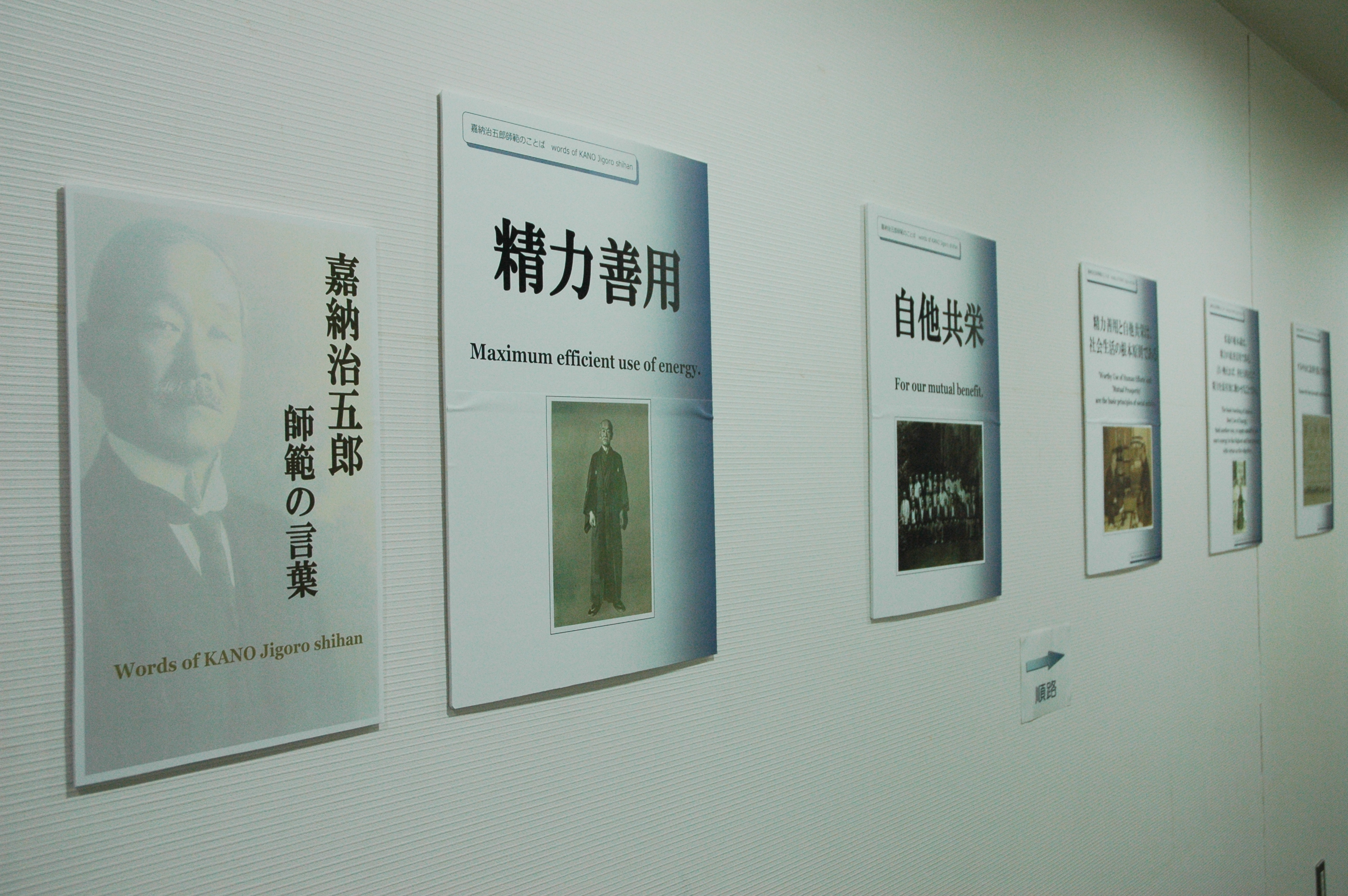 and info from Ukigoshi day: 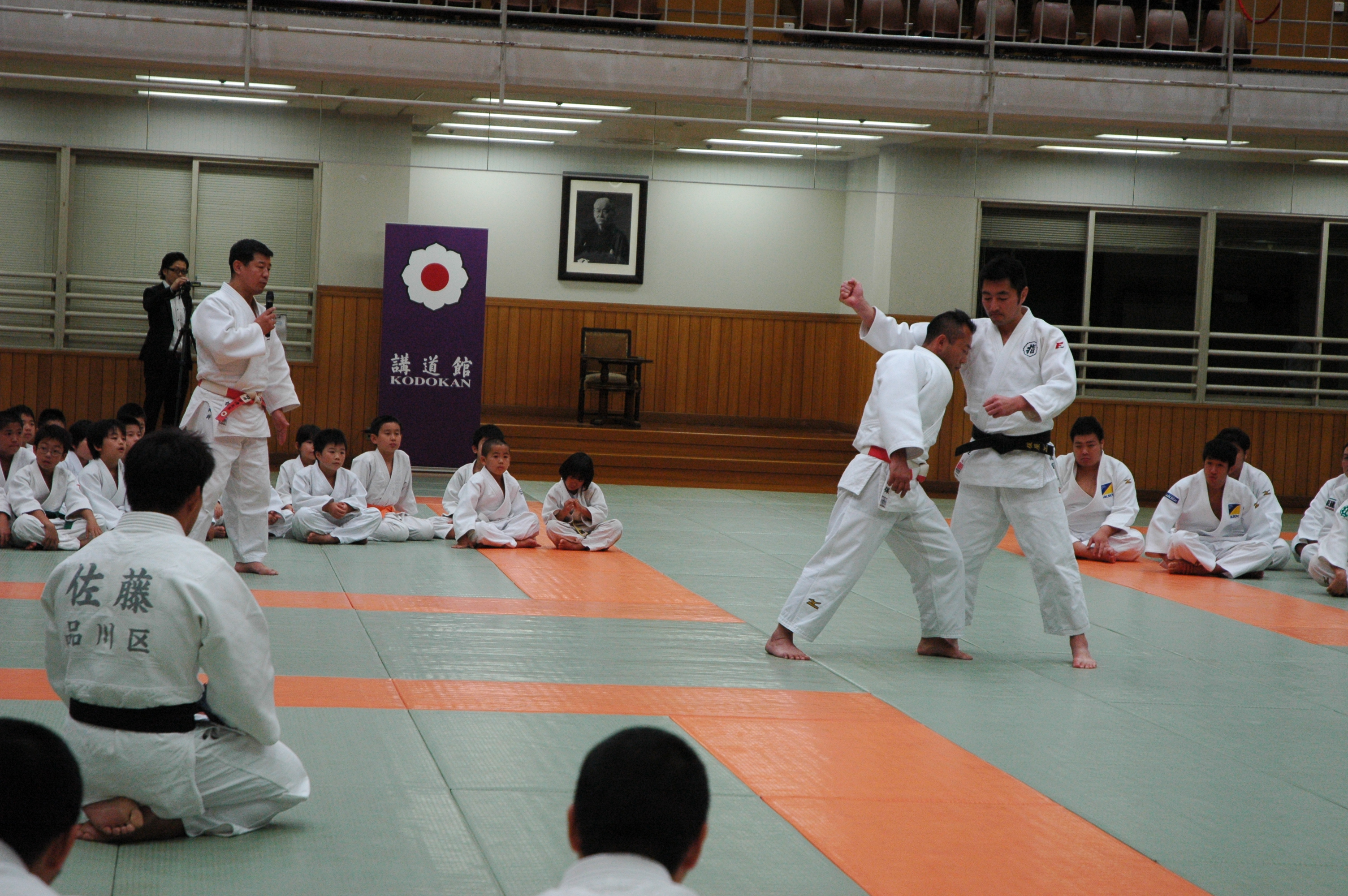 Kodokan Judo Museum will exhibit a material concerning Mitsuyo Maeda, a judoka also called Conde Koma who made a big achievement in Brazil.
Conde means the title of Lord in Portuguese. Koma came from Japanese word Komaru that means annoying (for opponents) because he was too strong to have a match.
A record book of the pledging for initiation shows his blood-sealed signature.

Thanks for posting this.

I checked: unfortunately this is only a single day exhibit.
noboru

one from Kanô shihan's sayings

One from Judoka Quaterly FCB page - Im not able give here the link to the picture - is not public, I think.