At the occasion of the 50th anniversary of the French Judo Federation's International Association of Judo Friends, a weeklong judo seminar was organised. French Judo Federation, the largest in the world (almost 600,000 members) put great effort into attracting exceptional cast of teachers known to  be difficult to convince accepting invitations and having high demands. Minimal rank for paticipation was 6th dan. Seminar was attended by 180 judo masters between 6th -9th dan from France, Japan, Switzerland, Holland, and other countries, with excellent result. 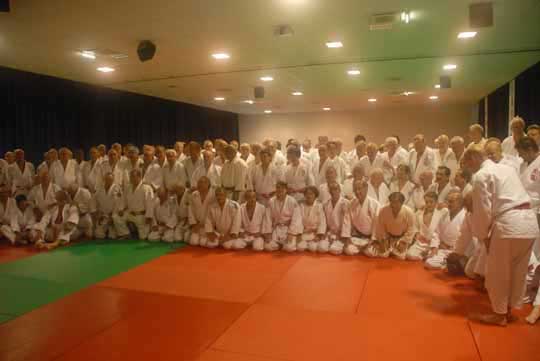 Okano taught tachi-waza technique introducing several basics, tokui-waza standing and matwork, and ways to teach beginners. Sometimes he offered his own pedagogy different from Kodokan. Master Okano, now over 70 years old, impressed by purity and lightness of his judo. Sensei Okano was in top-form smiling, making jokes, and also demonstrating powerful kiai. Participants were told of Okano DVDs soon being available with translation, and also full movie Passion for Judo of which internet version is just 1 part of 3 parts. 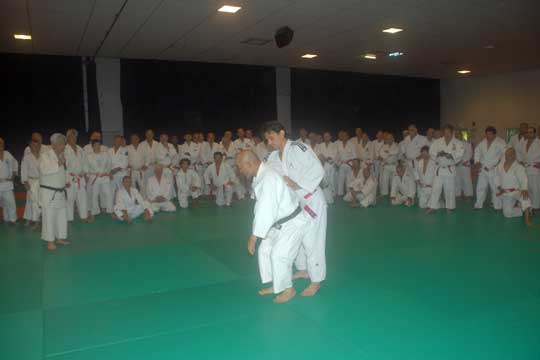 Sensei CK taught about 10 Kodokan katas and 9 other Japanese judo katas like from Mifune and Hirano. Clinic was exceptional leaving deep impression of erudition on both Japanese and European judo masters, but no filming allowed. Questions went on for hours until late in the night. On subsequent days also members of the public not judokas came to listen, especially to his teaching about the essence of the itsutsu-no-kata and about judo kata culture. Many present spoke of "kata revolution".

There were also seminars on medicine and judo health.

Thanks for posting - looks like a great event.
noboru

Nice report. Thank you. Pity that I did not know about this event.
Jonesy

noboru wrote:Nice report. Thank you. Pity that I did not know about this event.

6 Dan or above was attendance criteria.
big_budo

sounds fantastic. It's difficult to comprehend that amount of experience and knowledge in one room.
Stevens

Fantastic. Wonder what everybody must have seen and heard. Ofcourse almost everybody of this forum would have liked to have been there! Who was there of Holland? Hope to hear or see more of this superclinic.
Jonesy

Stevens wrote:Fantastic. Wonder what everybody must have seen and heard. Ofcourse almost everybody of this forum would have liked to have been there! Who was there of Holland? Hope to hear or see more of this superclinic.

Willem Visser was there....
Stevens

Thank you! Willem Visser is the man with the great connections.
Sponsored content