Info on this picture

Info on this picture

A friend of mine send me this photo some time ago but he had no information about it...

Can anybody tell me anything about it? Where, whos, when?
Anything will be welcome! 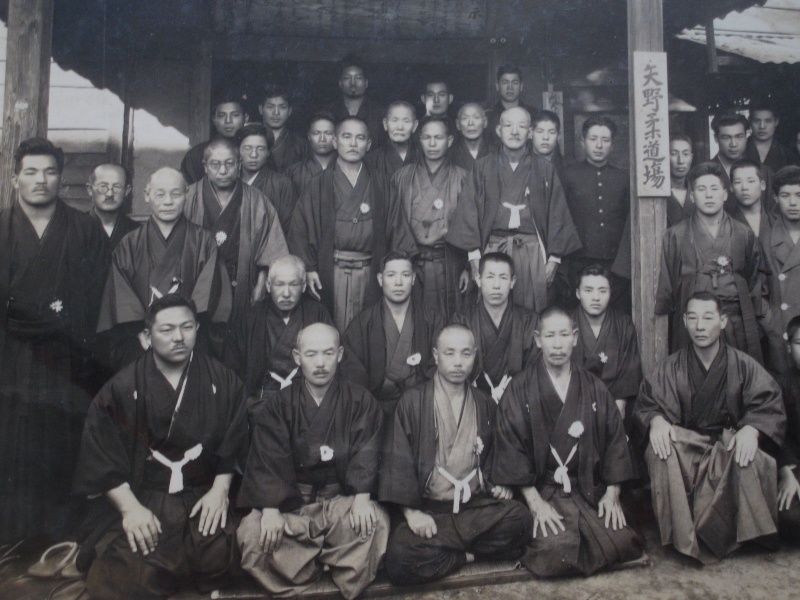 IgorRG wrote:A friend of mine send me this photo some time ago but he had no information about it...

Can anybody tell me anything about it? Where, whos, when?
Anything will be welcome!

First question then is which Yano-sensei is meant here ?

I am wondering if the person second from left on the first row is Munakata Itsurô ?  Or if not, Murakami Kunio ?  I always have a hard time keeping the two apart.

What I am going to write now is speculation, so do not take my conclusion as fact.

The name Yano is particularly connected to Takeuchi Santô-ryû jûjutsu, a school that was founded shortly before the start of the Meiji period. Later, like Tenjin Shin'yô-ryû many practitioners of the school cross-trained in Kôdôkan jûdô. Samura Kaichirô who together with Mifune was one of the 10th dan-holders to live until half of the 1960s was probably its most famous practioner in Kôdôkan jûdô. Practitioners of TSTR around the Taishô period ((1912-1926) often wore jûdôgi rather than hakama. I speculate that this dôjô and the people in the picture might be situated in that context ?  I have, however, no proof to substantiate that speculation.

One of the shihan from that ryû by the name of Yano is shown in the famous 1906 Butokukai picture with Kanô, seated second from right, but I do not recognize that gentleman as being present in the photo shown by you. Then again, who knows, since people age, and they sometimes may be hard to recognize when there is a time window of 20 years or more between two pictures.

"The world is a republic of mediocrities, and always was." (Thomas Carlyle)
"Nothing is as approved as mediocrity, the majority has established it and it fixes it fangs on whatever gets beyond it either way." (Blaise Pascal)
"Quand on essaie, c'est difficile. Quand on n'essaie pas, c'est impossible" (Guess Who ?)
"I am never wrong. Once I thought I was, and that was a mistake."
IgorRG

Thank you very much, even that is only speculation, it is a speculation from a true researcher.
I've tried, unsuccessfully, to match these guys with many other pictures.
The guy standing on the extreme left, looks very tough, big neck like Ushijima or Ebi Goichi...
NBK

I had a long thread on Takeuchi Santo ryu on the old forum.  Yano was a very famous instructor, played a role in a few interesting developments.

I know some folks reconstructing TSR based on the extensive notes of the last known instructor / soke, and with permission of the family.  The way they do it is very physical, seemingly would fit these stocky gents.

When Kano shihan opened a dojo in Kumamoto, he found fertile ground for training.
Sponsored content

» Jigoro Kanos trips to Europe (1933, 1934)
» does your club bow to picture of Kano before and after practice?
» Parent "extremely uncomfortable" having her children "bow to that picture on the wall"
» Finally: the picture that leaves no doubt about who was the true winner in the Douillet/Shinohara Sydney 2000 fight
» Judo Kyohan: A Master Text : by Sakujiro Yokoyama, Eisuke Oshima
Current date/time is Fri Sep 30, 2022 7:48 am